Why Become a Peacemaker?

Freedom is never more than one generation away from extinction. We didn’t pass it to our children in the bloodstream. It must be fought for, protected, and handed on for them to do the same, or one day we will spend our sunset years telling our children and our children’s children what it was once like in the United States where men were free. 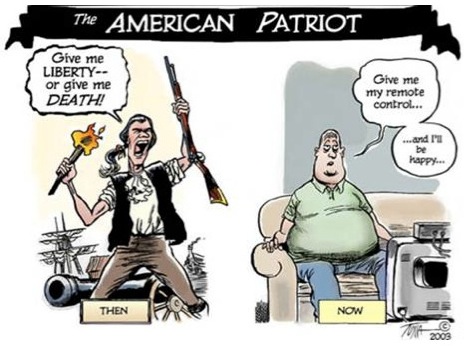 What is it that hinders everyday Americans from participating in social and political change? It is the belief that: “I am just one person! What can I do?” When you understand world history, you will see that every significant and major change was the result of one person or a small group of people who worked tirelessly to change their world.

Harriet Beecher Stowe the wife of a seminary professor wrote a novel called Uncle Tom’s Cabin which was instrumental in ending the barbaric institution of slavery. Her book was so effective in educating the American people to the true horrors of slavery that created such a national controversy, that when she was introduced to President Abraham Lincoln in 1862, he is said to have greeted her with the words: “So you are the little woman who wrote the book that started this great war!” One woman, with one book changed America for the better.

A man named Adolph Hitler sat in a prison and wrote a booked titled “Mein Kampf” which inspired the growing socialist movement in Germany that would ultimately lead to the death of nearly 60 million people. One man, with one book changed world history.

Our attempt to turn this nation around must begin with a grassroots movement. We will not be successful without everybody playing a small part in this very big endeavor. Remember, creeks feed streams, streams feed rivers and rivers feed oceans… and it all begins with a trickle. Do not think that your contribution is insignificant!

It does not require a majority to prevail, but rather an irate, tireless minority keen to set brush fires in people’s minds.

What Can I Do To Help?

This is not just religious rhetoric! This movement will succeed or fail based upon the prayers of God’s people. Scripture teaches that this is the first step in the healing of a nation. (2 Chronicle 7:14). This is explained in full detail in our “Appeal to Heaven” section.

The greatest thing about the day and age in which we live is the creation of social media (Facebook, Youtube etc…). This allows small organizations bypass the traditional media channels in order to get their message out with minimal cost. By simply Liking us on Facebook, together we can reach many of you friends and family with the message of national restoration.

Books like the Purpose Driven Life and the Prayer of Jabez were taught in many Youth Groups, small groups and bible studies. We have created the America Sermon (link to Youtube channel or video page) and the book: The Rise of America – Fighting the Next American Revolution and the Constitutional Crisis (link to store) as an education outreach resource to be used by the Christian church to teach ourselves and our children the truth about America’s Christian heritage.

Invite one of our speakers to speak at your church.

The first step on this movement must be an “awareness campaign.” Our organization is small and presently lacks the funds to take the campaign national. One of the greatest things that you can do to help is by first showing your support to your community. We have adopted the “Appeal to Heaven” phrase and flag to symbolize our effort. We have created yard signs and car magnets that will allow you to promote the movement. With minimal out-of-pocket expense you can help us advertise. We also have a local businessman that has agree to create a series of promotional items that will help bring awareness to our cause.

Peacemakers commit to providing sustained financial support for the ministry. Find out how you, your church or your business or can partner with us to spread the Good News through our outreach resources.