The Historical Cycle of the World’s Great Civilizations

Where Does America Fit into this Cycle?

As I woke this morning and turned on my television, in was reminded that today is the 30th anniversary of Martin Luther King’s “I have a dream” speech. This speech reinforced my belief that one person… one minister, who has the faith and the courage to confront the government using biblical truth like a sword, can change the future of our nation for the better. We believe that it is time that many like-minded people arise once again in order to return this nation to greatness.

On November 22, 1994, thirty of our States’ Republican governors unanimously adopted the Williamsburg Resolve acknowledging that the Federal government has clearly violated the Constitutional jurisdiction placed upon it. In it, they said:

“The challenges to the liberties of the people . . . come from our own Federal government that has defied, and now ignores, virtually every constitutional limit fashioned by the framers to confine its reach and thus to guard the freedoms of the people” and that “Federal action has exceeded the clear bounds of . . . the Constitution, and thus violated the rights guaranteed to the people.”

As the reins of power in this nation continue to be consolidated into the hand of fewer and fewer people in Washington D.C., we see one term that is being used with increasing frequency.  That term is EXTREMISM. While it is meant as a term of derision, it should be received as a badge of honor.

In authoritarian societies, tyrants, whether they be Kings, dictators, judges or even elected legislatures consider those who espouse freedom from tyranny as extremists. It has often been said that “One man’s terrorist is another man’s freedom fighter.” Our Founding Fathers were seen as “terrorist” by the tyrannical government of King George. However, the American people remember them as “Freedom fighters” and as a result; Americans have enjoyed more freedom than any other nation in history for nearly 200 years for the courage that they displayed in throwing of the chains of oppression.

In today’s American society, those who hold the moral, social and political values our or Founding Father as being labels as extremists by an increasingly tyrannical Federal Government. In an article titled: “Pentagon Labels Founding Fathers, Conservatives as Extremists” By Todd Starnes of Fox News, he contrasts the religious and political ideologies of the present day American government and that of our Founding Fathers. The article begins:

“George Washington would not be welcome in the modern U.S. military. Neither would Thomas Jefferson or Benjamin Franklin, according to Department of Defense training documents that depict the Founding Fathers as extremists and conservative (what they really meant to say is Christian) organizations as “hate groups.” Included in the 133-pages of lesson plans is a student guide entitled “Extremism.” The DOD warns students to be aware “that many extremists will talk of individual liberties, states’ rights and how to make the world a better place.” Under a section titled “Extremist Ideologies,” the document states, “In U.S. history, there are many examples of extremist ideologies and movements. The colonists who sought to free themselves from British rule and the Confederate states who sought to secede from the Northern states are just two examples.” 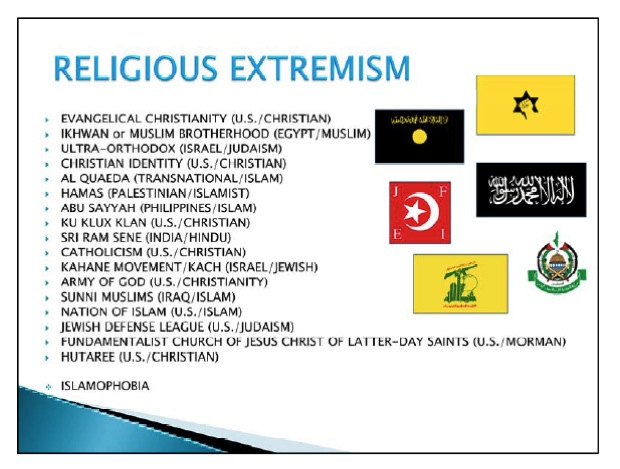 According the Pentagon and Department of Defense training documents, and Extremist is a person or group that: “advocates the use of force or violence; advocates supremacists causes based on race, ethnicity, religion, gender, or national origin; or otherwise engages to deprive individuals or groups of their civil rights.”

Therefore, according to Washington D.C. an extremist is a person or group that “deprives individuals or groups of their civil rights.” But who is the real extremists according to this Pentagon document? Does this not make the Supreme Court a group of Extremists when they striped the America people of the religious freedoms and their civil rights? Consider the evidence.

The assault on our civil and God-given rights began over half a century ago when the United States Supreme Court, illegally and unconstitutionally kicked God and prayer out of America’s schools, even though the First Amendment to the Constitution forbids the Federal Government from EVER prohibiting the freedom of religion or abridging the freedom of speech, or the freedom of press. If you have never read the Bill of Rights, now might be a good time to start. The phrase “Separation of Church and State does NOT appear in the document. Would you like to know which constitution the phrase does appear? The Constitution of the United Soviet Socialist Republics of 1936 reads as follows:

ARTICLE 124: “In order to ensure to citizen’s freedom of conscience, the church in the U.S.S.R. is separated from the State, and the school from the church.”

In response to the school prayer decision, Roman Catholic clergy were adamant in their criticism of the Court’s position.  Cardinal Spellman stated that he was ‘shocked.’ Cardinal McIntyre viewed the holding as ‘scandalizing’ and one which ‘puts shame on our faces as we are forced to emulate [Soviet Premier] Mr. Khrushchev.’ Americans characterized the decision as a ‘stupid… doctrinaire decision, an unrealistic decision, a decision that spits in the face of our history, our tradition, and our heritage as a religious people’

Because of the apathy of the American Christian in the 1950’ and 1960’s, we are presently and with greater frequency having our civil and God-given right striped from us. Fox News has learned that:

“The Obama administration has been accused of telling Catholic military chaplains what they can and cannot say from their pulpits after the Army ordered Catholic chaplains not to read a letter to parishioners from their archbishop. The Secretary of the Army feared the letter could be viewed as a call for civil disobedience. The letter called on Catholics to resist the policy the Obama Administration’s policy that would force institutions affiliated with religious groups to provide coverage for birth control, sterilization and “abortifacients.” The Catholic Church believes the mandate represents an unconstitutional violation of freedom of religion.”

Fox News has also reported that “The U.S. Military has blocked access to the Southern Baptist Convention’s website on an unknown number of military bases because it contains “hostile content” — just weeks after an Army briefing labeled Evangelical Christians and Roman Catholics as examples of religious extremism.

There is a growing divide in America those who espouse freedom and those who espouse tyranny. If you open your mouth stand up for any ideology, you will labeled an extremist by the other side. The list below contrasts the two styles of government will determine “What type of extremist will you be?

In April of 1963 Martin Luther King (who many at the time had labeled as an extremist) wrote the following letter from the Birmingham jail where he was imprisoned for demanding his God-given civil rights:

Of course, there is nothing new about this kind of civil disobedience. It was seen sublimely in the refusal of Shadrach, Meshach and Abednego to obey the laws of Nebuchadnezzar because a higher moral law was involved. It was practiced superbly by the early Christians who were willing to face hungry lions and the excruciating pain of chopping blocks, before submitting to certain unjust laws of the Roman Empire.

Did not Jesus Christ himself teach that those who followed and applied their teaching to their lives would be labeled as extremists?

“Blessed are you when they revile and persecute you, and say all kind of evil against you falsely for My sake. Rejoice and be exceedingly glad, for great is your reward in heaven, for so they persecuted the prophets who were before you. (Matt 5:11-12)

As our Federal government continues to defy, and ignores, virtually every constitutional limit fashioned by the framers to confine its reach departs, it will once again take a people of tremendous Spiritual Faith and Great Courage to restore the Liberties and Abundance that have been stolen from the American people. But be warned, those who have the faith and the courage to take up this cause will be labeled as extremists by the present day American Government. However, I believe that we are in good company.

We believe that history, principle and God himself testifies to the righteousness of our cause. Therefore, we ask you to join the next great civil rights movement. We ask you to join our “Appeal to Heaven.”

View all posts by Peacemakers →